Shame on me. After living in the Chicagoland area for the past year and some change, I hadn’t taken advantage of all the beautiful city of Chicago has to offer, why? Because I was stuck in the burbs. You see, I’m a city girl born and bred, but after moving to the burbs of the burbs, mind you where I live is like the King of the Burbs — I fell into the comfortableness of the quiet life. That’s cool and all, but my boyfriend and I decided that we would no longer be stuck in the suburban cycle. On the weekends, no longer would we subject ourselves to perfectly manicured grass, overcrowded mall movie theaters, ubiquitous, overly salty chain restaurants, and soccer moms and dads with understandably perpetually-petulant faces, and countenances. Nope! We’re headed to the big city!

Our staycation started with an hour and some change (told you we live far) ride downtown to the city. We checked into the gorgeous, luxurious, and super accommodating hotel, The Peninsula. You see because I travel quite often all over the globe, I’m use to accommodations that are nice as sh*t, and decidedly “meh,” as well. The Peninsula is definitely at the top of it’s class where customer service, accommodations, architecture, and overall ambience is concerned. In fact, for years now it’s been rated as THE top hotel in Chicago. So if you’re coming downtown or across country, or across the world to stay in Chicago, I definitely recommend this spot.

We stayed in a Deluxe Suite that had pretty much sweeping views of the city. It featured a separate parlor (living room) with a nutrition area (Nespresso coffee maker, Bernardaud China) an executive desk, complimentary VOIP phone for all your international business call needs, lol, dining room, and of course sofa and 65” inch TV, a separate bedroom with oh so comfortable custom Pratesi sheets, and gorgeously commissioned artwork. The bathroom was as grandiose as the sheets were comfortable — a jetted soaking tub and inlaid TV, separate makeup area, two separate vanities so that I could comfortably, and without complaint, lay all of my makeup and sh*t out just everywhere. The room was technologically advanced too, with three tablets from which you could customize the lighting, temperature, room privacy settings, call for valet, in-room dining menu, I could go on but let’s just say it was super convenient. Stay. Here.

After we sufficiently basked in the luxury of not having to take our beloved frenchie Bleu out to poop, and ordered a quick lunch (I got the turkey club, he got the lobster roll, I give my sandwich a 7/10 which is pretty high on my sandwich scale), we napped, got dressed, and headed to The Publican for dinner.

Do I recommend eating at The Publican? Yes. Admittedly we decided to chow down here because we saw Action Bronson y crew chowing down on delicious piggy goodness on Vice’s “F*ck, That’s Delicious.” We had to try it for ourselves. The Publican is a kitschy family style, yet hipster cool restaurant who’s main culinary focus is pork and seafood. I love the swine! I haven’t jumped on the “no pig” bandwagon, and my southern man loves it too so, win-win. We indulged in a plate full of aged ham, from Fermin Serrano to Colonel Bill’s Newsome, we enjoyed every piggy bite. The aged ham came with goat butter and peasants bread, lol. I laugh because when I was young, my sister and I always use to pretend we were stuck in some French proletariat fiefdom whenever we snacked on bread and butter, but yeah. I know we were weird nerds and I digress. Next, we had freaking delicious a*s crispy pig ear salad. Just try it and trust me. We had two full orders of mussels, and Bobby had oysters which I detest, but he made me try them and damn, I 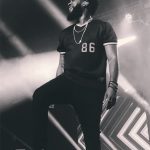 was surprised that I liked those little slimy globs of saltwater meat. Don’t tell him that though, lol. I also had this drink called “Up in the Air,” delicious mezcal, with pineapple juice and some other goodness. My boyfriend Bobby thinks mezcal tastes like an ashtray. He’s a gin guy but my absolute favorite libation in the world is the smoky queen of agave – mezcal.

Anyway, by this time we had to be out, we paid, then headed to Metro Chicago to see Big K.R.I.T. (shout out to my girl Liz for hooking us up with tickets to the sold out show!) Chicago has a huge arts seen, theaters, concerts venues, and is the home of the famous Second City Theater comedy club, which has undoubtedly been the breeding ground for some of your favorite SNL comedians. If you come to Chicago just for a weekend, or are coming downtown from the burbs like we did, definitely catch a show.

After we left Metro, we decided to hop an Uber to Au Cheval to see what all the hype was about. Apparently this ultra cool spot is one of the hardest resto doors in Chicago, we arrived, put our name down, and got seated in about ten minutes. Let me not mislead you into thinking this is the baseline experience. People wait two, three, even four hours for a taste of Cheval’s cheeseburger, and speakeasy ambience. But having a boyfriend who plays for the football team of the city you’re in has it’s perks, sometimes. We never pull the “Bears Card,” because to us, that’s corny, but hey! If your man plays for a sports team and you pull it? Get it how you live! Anyway, the maitre d recognized Bobby, came and got us, and there ya go!

We sat down, ordered what we came for, that big, fat, juicy cheeseburger with thick cut bacon, melted cheese, a snappy crispy pickle, and onion slaw, and chowed down. YUM. I mean I’m almost always middle of the road when it comes to my opinion on restaurant food, but this burger, and Bobby agreed, was one of the best burgers I’ve EVER had. It’s legit world famous and now, I understand why. Bobby added a fried egg, and bone marrow to his. The bone marrow came with perfectly buttery, toasted Texas toast, and beef cheek marmalade, so freaking good. They had Dragon’s Milk on tap — my honey’s favorite beer, and I ordered a Hemingway Daiquiri (of course I did) that had flor de cana rum, maraschino, grapefruit, and lime in it.

Stuffed and happy, we caught an Uber back to our hotel, and slept in late. The next morning we ordered breakfast which was an experience in itself, but I’ll let the photos speak. I definitely spent an extra hour on the treadmill thanks to that burger on Monday, but let me tell you, it was worth it. Go to Au Cheval and try that damn thing.

This is the first in our series of weekend foodie adventures in Chicago. We promised ourselves we’d escape the suburban doldrums at least twice a month and make it down there. And I promise to clue you in when we go so that you, my dear readers, can retrace our steps if you want, and have some fun in the city. We’ve done the work for you, just show up. This was definitely the weekend I fell for Chicago, and maybe, just maybe, we can keep this love affair going.

As always, let me know if you go.

Creating Space For Yourself